Just four months ahead of the planned L-train shutdown, Governor Andrew Cuomo and a team of experts toured a section of the Canarsie Tunnel in order to determine whether the MTA’s repair plan is up to snuff. Cuomo got up close and personal this morning with what he described as the “toxic cocktail” that was created when salt water from Hurricane Sandy mixed with the 94-year-old tunnel’s electrical equipment.

At the 1:58 mark of b-roll footage provided by the governor’s office, Cuomo dips his hand into the murky sludge at the bottom of the tracks. It almost looks like he’s going to put a finger to his mouth and taste it, like a mixologist with a penchant for brick-infused whiskey. But the video cuts off before we find out whether he had the guts.

But seriously, this is nothing to joke about. After touring the tunnel with MTA reps, former US Department of Transportation chief of staff Sarah Feinberg, and the deans and others from Columbia and Cornell’s engineering schools, Cuomo said he wanted to personally reassure doubtful New Yorkers that he had pursued all possible avenues.

“The MTA believes their methodology is the best way to do it and the fastest way to do it,” he said. “New Yorkers tend to be a skeptical bunch. This is going to be highly disruptive, construction is going to start in four months, and I wanted to make sure we get the best minds on the globe to review the project.” 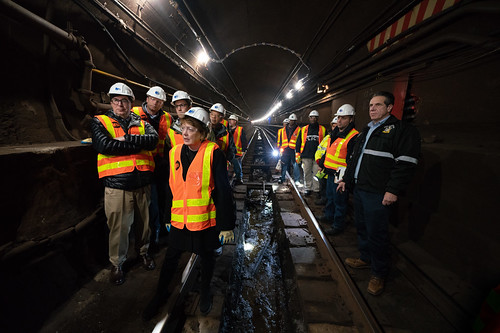 As the team of experts does further research, Cuomo said, they might decide that no changes are needed, they might offer minor suggestions, or they might come up with a “totally different theory of how this can be done.” But he stressed that the MTA is currently on track to execute its planned 15-month shutdown of service across the East River and within Manhattan and is not preparing for a scenario that involves the previously rejected alternative of closing the tunnel only during nights and weekends.

Cuomo described this morning’s tour/photo op, which disrupted train service and was dubbed a “blatant stunt” by one transportation blogger, as his panel’s “preliminary look” at physical damage to the tunnel, including concrete electrical housing that had cracked due to salt buildup, and said he expected to know where the crack team stood in about two weeks.

Here are the governor’s full remarks: