Evolution of Economics: The Wastes, a Curiously

When Dean Summach of Economics began working on The Wastes, he made sure to let those close to him know what to expect. He did not want to shock or upset his family and friends with his new project. Dean wanted to create a “divorce-themed dance album.” Sounds odd…well, with divorce being a societal sign of a “failed marriage,” I think what I mean is that I expected the album to be an attack on the Ex or against the institution of marriage in general. Dean saw way more than that – he wanted to create positive action where divorce threatened to spread depression.

Dean has spent the majority of his life working with music. After the marriage to the mother of his son, Sheena Greer, came to an end, he used the transformative authority found in music to heal and recreate a new self. A self that was better and more positive than he used to be. Dean gives credit to music, stating: “[The Wastes] helped me get through…The best medicine is listening to or creating music.” Prior to the divorce, Greer collaborated with him for his instrumental electro-rock debut LP, Economics, released 1 October 2008. Dean turned to Sheena to assist him with the new project despite the break-up because he wanted to make something positive out of their “bad” situation. In efforts to express the emotions he felt shifting him, Dean decided to try a new approach and added lyrics into his music.

The first track on The Wastes is “We Didn’t Make It.” Released on 28 October 2014, The Wastes – and the placement of this track – took Summach’s local community by surprise. “We Didn’t Make It” is a unique form of duet in which Dean wrote half of the lyrics, and Sheena wrote her responses. The concept took my breath away – a literal conversation through music. A deep, thoughtful approach to the subjective expression of both sides. In the lyrics, Dean says, “You were always trying to figure me out…what I was thinking about. We didn’t make it, but that’s okay…I don’t know how we’ll be at the end of the day.” Sheena responds with: “I think I fell when you stopped wanting me that way. And I want to disappear a little more each day. Hands so small, I could never hold up what inflicts you, a thousand pieces, the way I broke myself to fix you.” The tempo and energy of “We Didn’t Make It” builds as the discussion broadens. Summach notes that lyrics alone should not be the focus – let the music guide you.

The divorced couple incorporated music to assist in ensuring a positive environment existed for their son. Instead of sulking in depression or striking out with hateful attacks, Dean and Sheena benefited from the mutual effort of music. Dean said, “I could have gone the other way and been self-destructive…it is easier to get through [with positive action].” The locals of Saskatoon, Saskatchewan, Canada were so intrigued by the divorced couple’s ability to get along so well, they approached Sheena to write an article about The Wastes. There is a good bit of positivity in the album as well as the interview with Greer. In Greer’s piece, “Talk to me in Thunder and Lightning: A Look into The Wastes by Economics,” she noted that she felt somewhat responsible for the album. Greer quoted Dean’s text message in which he said the album was: “Less about divorce…and more about change and life adjustments” (Omniocity). Click HERE to read Greer’s full article. She offers a truly personal approach, with a few bits that only a wife could know. She wrote, “He used to write with a guitar on his chest, picking away at notes between mouthfuls of Spitz and checking basketball scores, until finally the chords aligned…[The Wastes] was written differently” (Omniocity). Economics was evolving.

Dean, himself, was changing – and his music altered along with him. Summach and Greer have a unique relationship in which they work together to raise their son, juggling parent “switches” regularly. Dean said his son is with him 40/60, and that they maintain two stable environments. Greer and Summach get along so well that their son is accustomed to the arrangement and considers it “normal” for parents who are not “together” but manage to co-exist in this way. It would be nice if their version of “normal” were seen more in society as Sheena and Dean experience positive involvement. To ensure his son has a balanced life, Economics keep their performances local. Dean will travel for a festival, but the event is not a regular occurrence. Dean has a lot going on in his life, and he is considerate of the needs of his son as well as himself. Summach does not consider this restriction as limiting him, but instead choses to see it as opportunity to benefit from community. In July of 2015, The Wastes was nominated for the Western Canadian Music Award in the Best Electronic/Dance Album category (@DeanSummach). He said he had to go up against a pop band, but he greatly enjoyed the experience of performing live at the festival. He said it felt good to be recognized. Dean lets the positive hope for improvement spice up his everyday routine.

With effort, people can alter their own constitution. Greer said, “While the first half of [The Wastes] really speaks to Dean’s older style of writing, and speaks a lot to our divorce, by the end of the album something completely different has emerged” (Omniocity). Like Dean’s perspective, the album evolves from an end to a new beginning. With a fresh take on life and the ability to look for the good, Dean was led to incorporate positivity through artistic expression. Using his art to sculpt his future, Dean began to delve into the single life and explore his possibilities. 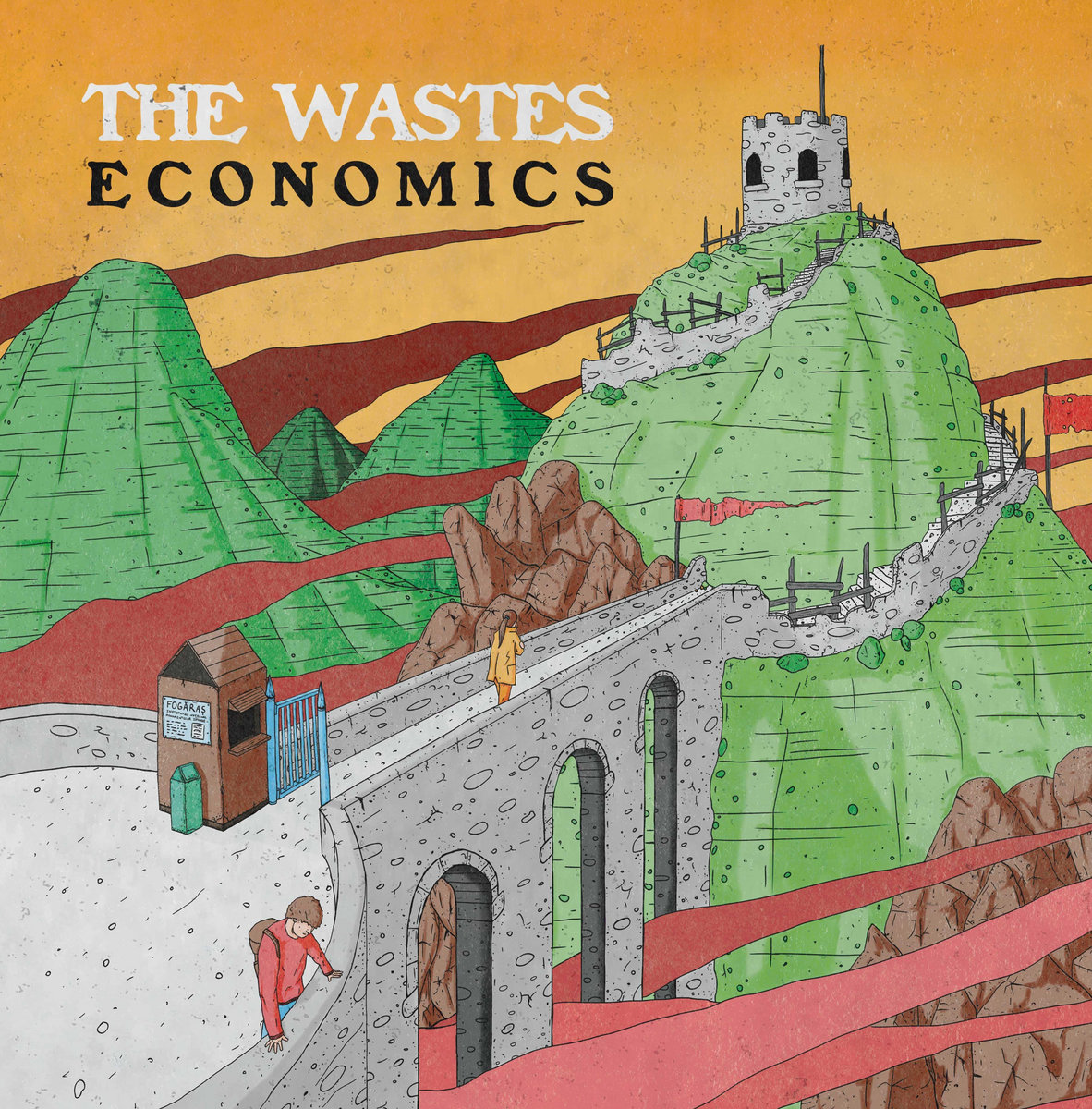 He also incorporated more lyricists and built on the vocals. Dean noted that his process begins with the music, and it is later that he comes back and sees where words will fit. He said, “I make the lyrics better as I go along.” The Wastes features Maybe Smith, soso, The Karpinka Brothers, Twin Voices, and others, who collaborated with Economics to create this transformative blend of tracks (BandCamp). Dean had the brilliant idea of not only incorporating outside assistance with lyrics, but also asking those lyricists to incorporate their own stories. He did not want the album to be all about heartache and misery – emotions that typically accompany divorce. Dean wanted the concept of divorce to be viewed as a new beginning – for him and for Sheena. He asked contributors to have the theme revolve around their own experiences – he wanted their personal take on something that happened to them, affecting their lives. Dean looked to friends to further build his platform of diversity.

Mainly, what Economics wants with The Wastes is for it to be what it is: a dance album. The tracks all offer rhythmic melodies that affect the senses, encouraging one to feel the altering abilities found in change and innovation. In “Deviations,” the first two-minutes is instrumental dance-club mixes with killer keyboard and synthesizer action. The lyrics come in like a secret one doesn’t expect. Laura Beach says, “You were locked up, inside your head…You’ll never know what you’ll do till you try to forget that night we loved” (BandCamp) Again though, the music is what moves the listener, and the beats in “Deviations” coil around the room, daring one not to dance, to sway with the power of change.

Economics does a good bit of shapeshifting, bending the laws of genre into a new pluralistic style of sound. Dean confessed: “I love dance music.” Economics website describes the sound as: “an ambitious collection of dense and delicate songs, falling somewhere in between adventurous post-rock, instrumental hip-hop, and vintage electro-pop” (@DeanSummach). That’s quite a mouthful of musical tastes, when asked how these musical blends evolve, Dean said that he listens to a lot of dense music, understanding multiple sounds from different instruments. Greer said Dean used to prefer organic sounds, but nowadays, he said he comes up with a sound in his head and then looks for instruments that fit the bill. Dean blends diverse sounds and styles to perfect his musical visions. While he does not claim to be proficient in all the instruments, Dean likes to experiment with the keyboard, synthesizer, drums, and – of course – the first instrument he learned: the guitar. Music has always surrounded Dean’s life. He mentioned that his grandparents were both musicians. As a child, instruments – including an accordion – were available to him, and he took the opportunity to teach himself how to play.

Dean has become a person who embraces change, growth, and responsibility. As noted above, he thanks music for his ability. As an artist, Dean grows with experience. Currently, Dean said he is working on new tracks and toying with different sound options, but he did not offer any concrete hints on future productions. He records from home, in his living room. Dean has considered the recording studio, but he prefers his home set-up for the accessibility. He’s the type of guy that can sporadically sprout a new idea, and there is no time to wait for the studio. Economics home-recording style fits his needs. More to come, I am sure, Dean is still evolving. And I am interested to see what new alterations and modifications he composes next.

Dean Summach strongly feels that his art continues to work healing energies into his life. Daily, he grows with his music, shapeshifting in art. In appreciation for the transformative abilities of music, Economics donates a percentage of sales through BandCamp to Music Heals Charitable Foundation, servicing his local community in Canada. Utilizing the healing powers of music, Music Heals lists the description of what music therapy entails:

Music therapy is the skillful use of music and musical elements by an accredited music therapist to promote, maintain, and restore mental, physical, emotional and spiritual

health. Music has nonverbal, creative, structural, and emotional qualities. These are used

Dean benefits greatly from music therapy, and he wants to give back to his community in efforts to help someone else tap into the nurturing elements found in artistic expression. Music Heals assists and serves children, seniors, palliative care, the autism spectrum, burn units, dementia, bereavement, rehabilitation, and more (MusicHeals). Click HERE to view and donate directly to Music Heals. Click HERE to view and purchase The Wastes by Economics on BandCamp. As mentioned above, Dean is donating a percentage of the proceeds to Music Heals. Feel free to be generous to a notable cause.

Music can improve, alter, and change the lives of every individual. Creative innovation – as displayed by Dean Summach’s artistic blends – will help to create the future. Dean is living proof that music and positive development via experience can redefine one’s very life. Take a cue from Economics, and seize up on the transformative powers of dance and music.